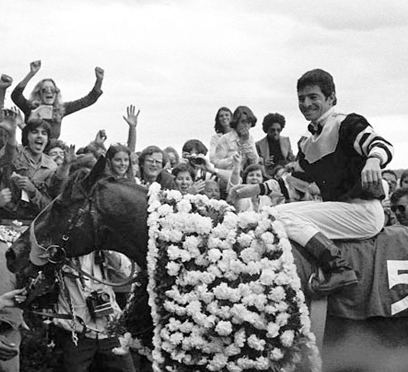 Seattle SlewAt birth, no one expected Seattle Slew to do much of anything.

Foaled in 1974 in Kentucky, the son of Bold Reasoning out of My Charmer was first described by White Horse Acres breeding manager Paul Mallory as “ugly.” A plain dark bay – nearly black – colt, Seattle Slew had no white markings, big floppy ears, and a domineering personality, even as a youngster.

“He was the boss, even when he was little,” Mallory was quoted by the Blood Horse in 1994. “Didn’t nobody bother him while he was eating.”

The colt was not accepted to the prestigious 1975 Keeneland summer yearling sale based on pedigree and appearance. Instead, he went to the Fasig-Tipton Lexington auction. Steve Cady of the New York Times quoted the assessment of the colt by Ted Bates of Fasig-Tipton:

“Above average in size – shoulder developed well – good angle and strong back – good through the middle, with good spring of rib – nice hind leg, but passes close at hocks – quick appearance – turns out moderately right front from knee down.”

Slew was sold to Pearson’s Barn for $17,500. The owners, two young couples from Washington State –Mickey and Karen Taylor and Jim and Sally Hill – had chosen the colt for a reason.

A veterinarian who had done work on Bold Reasoning, Jim Hill was intrigued by his first crop yearlings and thought this particular colt was the best of the lot.

“When I first saw him I said he was a runner or my name was not Jim Hill,” Hill told The Blood Horse. “I thought he had everything it took from a physical standpoint, to be a racehorse. I certainly didn’t foresee he would be a champion, but I did feel he would be a runner.”

The owners dubbed the horse Seattle Slew – Seattle for the city Karen and Mickey Taylor called home, Slew for the muddy, swampy character of property Jim Hill owned in Florida. Around the barn, trainer Bill Turner called him “Baby Huey”, after the ungainly cartoon character.

From the moment he set foot on a racetrack though, Slew proved Jim Hill’s instincts had been sound. The colt began his racing career at Belmont with an easy five-length victory in a six furlong maiden race on September 20, 1976. He raced twice more as a two-year-old, closing out the year with a gate-to-wire win in the G1 Champagne Stakes at Belmont Park.

Slew did not race again until early March of 1977, but made an effortless comeback winning a seven furlong allowance race by nine lengths. After two easy G1 scores in the Flamingo and the Wood Memorial, the colt headed to Churchill Downs.

Unlike some of his previous starts, the Derby proved more of a challenge, but one Slew met readily. Caught in traffic after a troubled start, the colt scrapped his way to the front and emerged a one and three-quarter length winner. The Preakness was easier – Slew won by a length and a half after drawing far enough away from the rest of the field that French-born jockey Jean Cruguet felt comfortable easing him in the stretch.

Neither of these performances compared to Slew’s win in the Belmont. Breaking from post five over a muddy track, the colt took an authoritative lead from the start and, though momentarily pressured by Sanhedrin near the quarter pole, maintained the lead to the finish, winning by four lengths. Cruguet was so confident in the stretch that he stood up in the irons and waved his whip to the crowd even before the wire.

“He went away,” Cruguet said after the race. “He had plenty left. He had relaxed and rated beautifully down the backstretch. In the stretch I looked to make sure and he was just going so beautifully and nobody was going to catch him this day.”

In winning the Belmont, Slew became the 10th Triple Crown winner and the first undefeated horse to do so.

After running fourth in his next start, the G1 Swaps the following month, Slew developed a rare virus and nearly died. He returned to racing in May 1978 to win an allowance race for new trainer Doug Peterson and raced well overall as a four-year-old. Two months before he was retired, Slew defeated the heir to the Triple Crown, Affirmed, in the G1 Marlboro Cup.

After a very successful stud career – he sired more than 100 stakes winners including A.P. Indy, Swale, and Slew o’ Gold – Seattle Slew died on the 25th anniversary of his victory in the Kentucky Derby, May 7, 2002.

Oops, you forgot something.

The words you entered did not match the given text. Please try again.


issues to write about in a college essay
https://kehillathisrael.webs.com/apps/guestbook/

Reply JamosStync
6:30 AM on June 4, 2021
Wonderful stuff. With thanks.
https://essaypromaster.com/
how to write an exploratory essay
thesis statement maker
how to be a good essay writer


we write your essay
https://contest101.webs.com/apps/guestbook/

Reply JamosStync
7:15 PM on June 4, 2021
You stated this wonderfully!
https://paperwritingservicestops.com/
step to write an essay
dissertation writing services
how to write a 500 word essay about yourself

url=https://paperwritingservicestops.com/ says...
how to write a thesis statement

Reply JamosStync
8:59 PM on June 5, 2021
Many thanks, Useful stuff!
https://scoringessays.com/
how to write a summary response essay
custom essay writing services
how to write an essay about your goals


how to write an interesting essay
coursework
reflective essay on writing


how to write an apa essay
https://contest101.webs.com/apps/guestbook/

Reply JamosStync
3:22 AM on June 12, 2021
Effectively spoken genuinely! !
https://paperwritingservicestops.com/
how to write an essay about yourself for college
https://scoringessays.com/
books on essay writing
https://topessaywritingbase.com/
how to write an essay paper
https://topswritingservices.com/
help with writing college essays
https://afrocubania.webs.com/apps/blog/show/47011901-camiseta

Oops! This site has expired.

If you are the site owner, please renew your premium subscription or contact support.